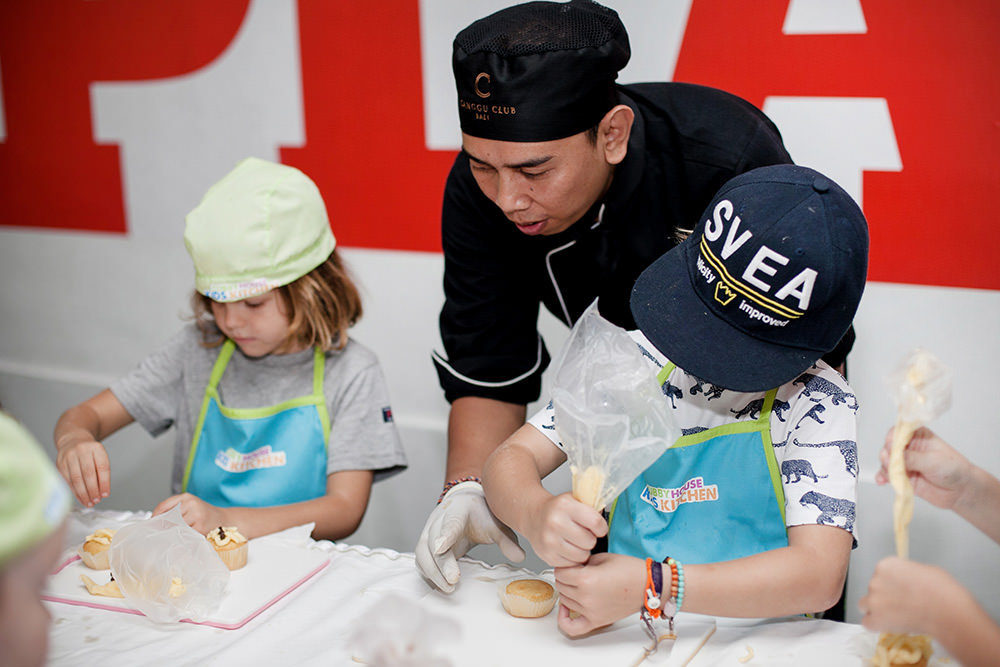 Move over Masterchef. The kids are in the kitchen at Cubby House Kids Club!

If your children are anything like mine, they are constantly begging to bake, mix, melt or mash up some sort of concoction in the kitchen! Why not let them embrace their inner chef at the new kid’s cooking classes commencing this month at Cubby House Kids Club located opposite Canggu Club.

With the multitude of cooking shows and food safaris bombarding us on television these days, it’s little wonder our younger family members develop an appetite for culinary adventure and want a taste of the action! Allow them to unleash their cooking skills in a safe environment which encourages discovery and creativity, as well as introducing them to lifelong culinary skills.

Cubby House Kids Kitchen have commenced fortnightly creative cooking classes for budding junior chefs, with their next masterclass commencing September 26th. These Saturday sessions are available to two age groups, with 4yrs to 8yrs from 10am – 11am and ages 9 to 12yrs from 12 noon to 1.30pm. Nothing too long, just the right amount of time for eager youngsters to craft their kitchen masterpiece!

Under the watchful eye and instruction of qualified chefs, classes will cover how to make and decorate your own cupcakes, the art of pancakes and the perfect pizza. Kids can also learn how to create healthy meal options with sessions on rainbow sushi and tasty tacos and dessert is definitely on the menu in November with an ‘uber cool’ cooking class scheduled for nitrogen ice cream creations. Yes please! Every junior cook receives a chef’s certificate and recipe at the end of each session so they can continue to practice their newfound kitchen skills on the family at home. 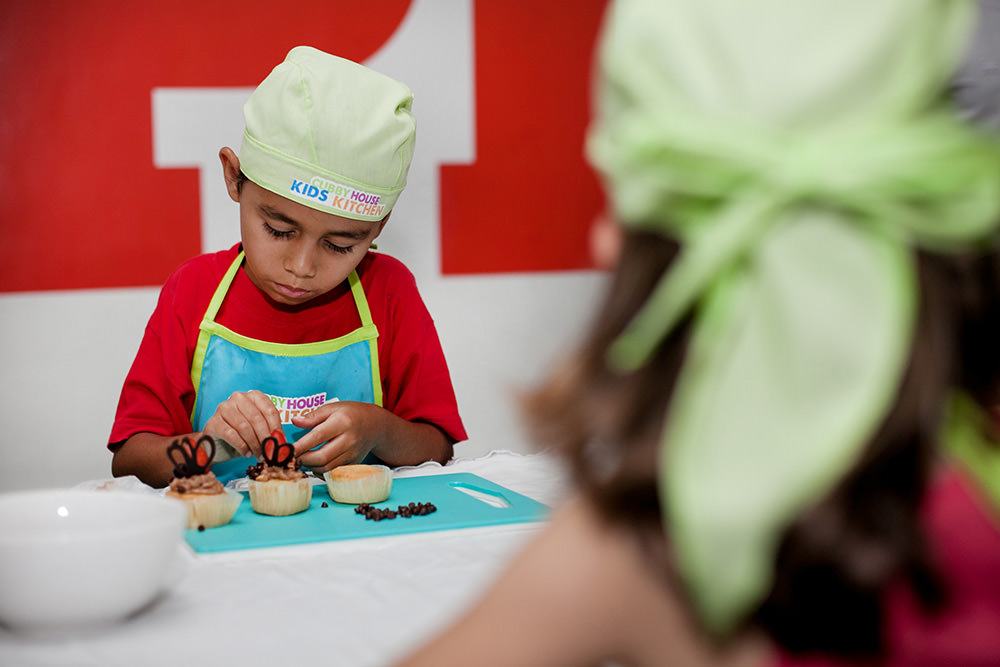 Drop in for individual sessions from just Rp120,000++ (4-8 years) and Rp150,000++ (9-12 years) or book and pay for 6 classes in advance and receive a free chef’s hat and apron valued at Rp180,000! As part of their ongoing members’ benefits program, Canggu Club Gold and Platinum cardholders are eligible for 20% discount off these rates.

In order to maintain an optimal and safe kitchen environment, limited spaces are available so avoid disappointment and book your class today by contacting the friendly team at: cubbyhouse@cangguclub.com . For further information on class schedules and dates go to their website: www.cubbyhousekidsclub.com

The perfect solution to stave off Saturday boredom, wet weather weekend woes or simply an indoor holiday option for the youngsters, Kids Kitchen at Cubby House is educational and entertaining and you can keep your own kitchen minus the mess. Of course there’s also the added bonus of them bringing home afternoon tea! 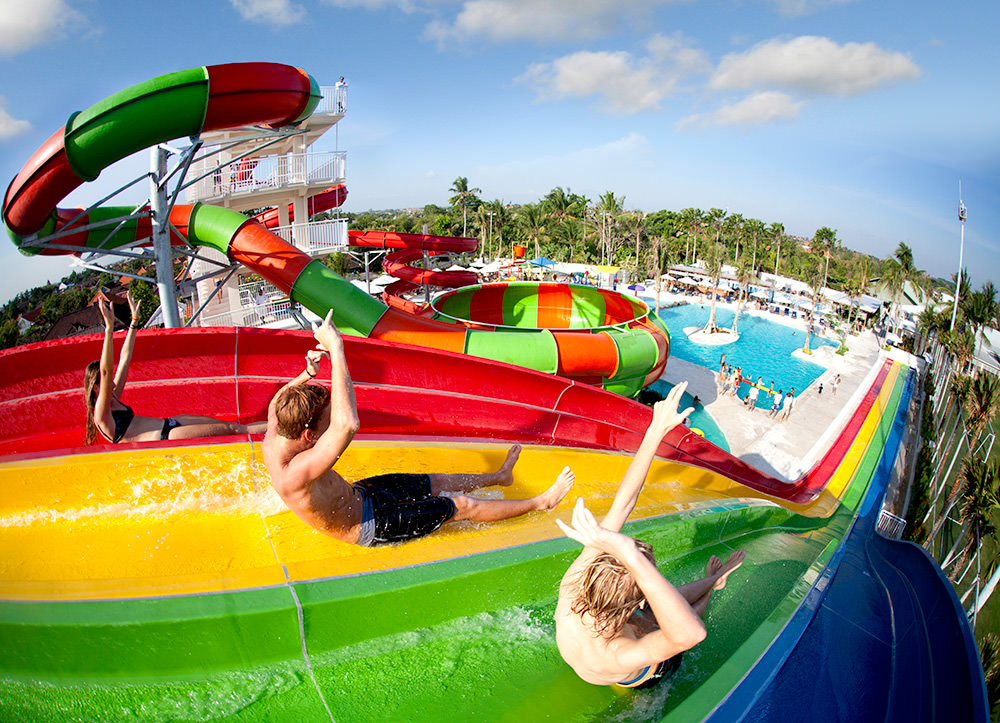 Can you believe it? Canggu Club’s newest waterpark is already one year old and they are inviting everyone along to celebrate with Splash’s Big Birthday Bash! For twelve months now, Big Red, Speed Racer and Super Bowl have been entertaining the crowds at Canggu’s very own avenue for aquatic fun.

But it’s not just your run of the mill birthday party either. The party plans for Friday October 2nd will also include the Junior Sports Academy end of term break up as well as a market bazaar!

Celebrations kick off from midday with the pool party from noon. Once the kids are happily ensconced on the slides parents can enjoy some relaxed retail therapy and browse the bounty of goodies on offer at the market bazaar from 12pm. Choose from a selection of reasonably priced swimwear, homewares, toys, clothing, shoes, sarong towels, totes, leather goods and lots more from the vast variety of stalls in attendance. With so many locally produced and quality items on offer,  ou’ll be unlikely to leave empty handed! Vendor registration is open to everyone and Canggu Club Silver, Gold and Platinum members also enjoyed the added bonus of registering their stall free of charge!

Coinciding with the end of the Canggu Community School term, cool tunes and entertainment on the day will commence from 2pm with the Junior Sports Academy’s play, performance and presentation from 3pm. It’s that time of the term when your youngsters get the opportunity to showcase the skills and sporting prowess they have honed over the previous weeks and parents can be a part of the afternoon.  Activities will include soccer games and a gymnastics presentation. Parents and siblings of JSA participants who are not members of the Canggu Club can join in the action from 3pm by taking advantage of the half price day pass rate! Of course as usual, entry to the party for Canggu Club members is free.

But the excitement doesn’t stop there. The famous foam party is back from 5pm and anyone who has experienced the fun of the foam at previous parties will confirm it’s loads of laughs, safe and seriously sudsy! All soap aside, kids and the young at heart can round off a terrific evening with some popcorn and movie time at Starlight Movies from 7pm.

As always, Canggu Club will offer a variety of options for healthy snacks at their numerous food and beverage outlets, or take advantage of the kids being actively engaged at the movies and stay for dinner and a refreshing drink. There is always the added bonus  of extra adrenalin filled Fridaynight action with Mini Mania, Bounce Mania and Bounce After Dark just across the road!

So it looks like the Splash First Birthday Bash at The Canggu Club will be where the party is at on Friday October 2nd. Make plans for a fun fuelled start to the holidays with an afternoon of entertainment for everyone. For further information on the program of events for the day or day pass prices for non members and guests, contact Canggu Club reception on: +62 361 8483939 or email them at: 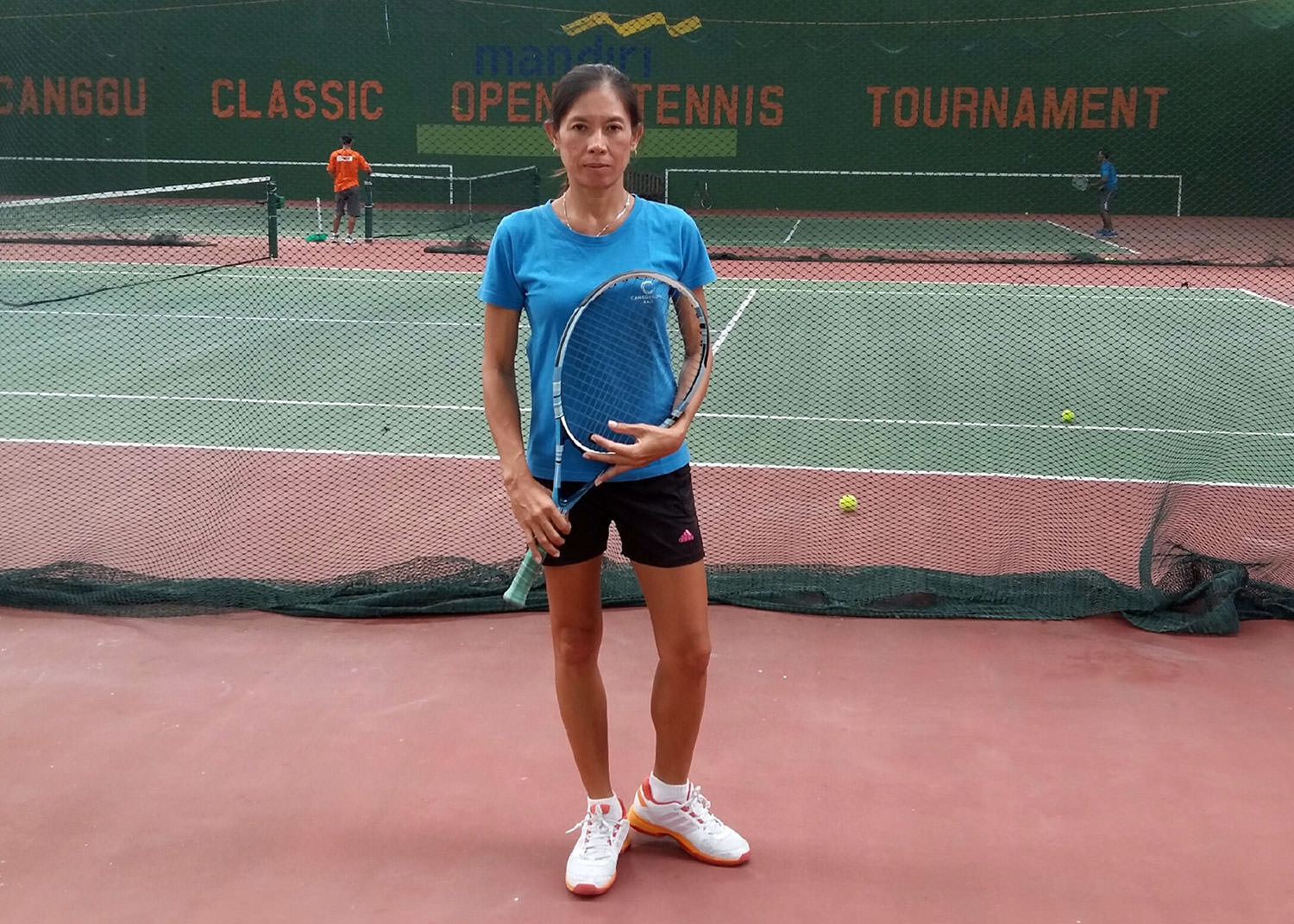 There’s a new queen of the court and she is here to stay! Those of us who frequent the Canggu Club Tennis Centre will already be familiar with new Tennis Club Coordinator, Nining’s face as she has assisted many of us with our swing for some years now!
A veteran on the Indonesian tennis circuit, Nining (Sediati Merdiningsih) began playing the game at the tender age of nine and started competition from just ten years of age! A year later saw a move to Jakarta after her talent was scouted by local tennis club, Nugra Santana who offered her a coveted sponsorship.

At the age of twelve she had risen to an incredible number one ranking for junior female in Indonesia and continued to participate and succeed in numerous tournaments, winning an impressive twelve in just one year! From age 13 – 17 years, Nining played the Asian circuit, including a three month tennis tour of the United States.

Her move to Bali a few years later saw her secure certification in teaching and between instruction and participating in tournaments around the island, she also coached the local Bali team to the number three position nationally!

Already having been a firm fixture with Canggu Club Tennis for around eight years now, Nining knows the run of these courts like, well…….. her back hand! Her friendly manner and tennis talents puts her in high demand as a coach and hitting partner, with many of us hoping her numerous skills on the court might rub off. It was no surprise she was the obvious choice to fill previous Head of Canggu Club Tennis, Paul McCabe’s rather large shoes after he moved on to other ventures last month.

Nining’s familiarity with the day to day operations of the Tennis Club, her obvious popularity with members and guests, young and old as well as her talents as a player, hitting partner and coach, made her the ideal candidate for Canggu Tennis Club Coordinator. Along with her task of organising other coaches and assistants, she also takes on the massive role of maintaining the smooth operation of the hugely popular Junior Sports Academy tennis program.

We wish this popular and talented local lady every success in her new position and look forward to yet another busy and exciting year of tennis and the Canggu Club Tennis Centre. Congratulations Nining! 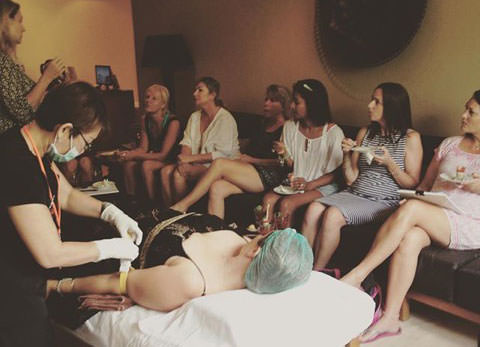 Being on the wrong side of forty, a lover of the sun and a little bit vain, I have long been on the lookout for ways to return some of that youthful glow to my face and replenish what gravity and the years have taken away!

Having never been wildly enthusiastic about the thought of injecting foreign filler matter into my rapidly sagging jowls, surprisingly, the idea of PRP therapy did pique my curiosity. Billed as the “Vampire Facial” and apparently made famous by one of those Kardashian sisters, Body Temple Spa and Cocoon Medical showcased a demo of the procedure for their monthly Monday morning Beauty Talks, so I went along for a look.

PRP (or platelet rich plasma) therapy is not a new procedure. It has long been employed in orthopaedics as a treatment to promote rapid healing and replenish tissue growth in knee and shoulder injuries and, only recently as an anti ageing procedure. Not surprisingly, it is the most popular procedure at Cocoon Medical Spa after botox!

PRP therapy is a process whereby qualified therapists draw around 40ml of your blood (yes there are needles), place it in a centrifuge and spin it madly for about ten minutes in order to separate the platelet rich plasma from the other red bits. That 40 ml typically produces just 10 ml of the ‘good stuff’ which is then injected (more needles!!) into the areas of the face you wish to rejuvenate. Designed to promote healing, production of hyaluronic acid and collagen growth, it is really the only safe stuff to inject in those problem ‘under the eye’ areas where we all seem to carry a little extra unwanted luggage and where botox and fillers just can’t go! If you think about it, they are simply putting back the best of the bits they just took out! Easy!

In order to expedite the process and due to the fact that ‘we are talking injections here people!’, the team at Body Temple and Cocoon showcased a slightly different PRP procedure for our Monday Morning Beauty Talks. For the purposes of this demo and to allow us ladies to gather ‘round, devour complimentary munchies and watch our volunteer (should that read victim?) for the day, the therapists demonstrated a slightly less invasive way to reap the rewards of PRP therapy. In this instance, just 10 ml of blood was drawn and separated whilst our guinea pig enjoyed a microdermabrasion in preparation for what was to follow. The plasma extracted, a derma roller was used over the face to ‘perforate’ the skin, after which the plasma was gently massaged into the aerated tissue! Ewww! A little bit icky, this procedure is a slightly less daunting and invasive but still produces the similar results of cell rejuvenation and collagen growth, promoting fresh, plump, younger looking skin. Yippeee! Sign me up!

Every month Body Temple Spa @ The Canggu Club, along with Cocoon Medical Spa join forces to present free and informative information mornings to showcase therapies and provide info on all of those hints we need to know to stay beautiful inside and out. The mornings are open to everyone and you do not need to be a Canggu Club member to join in. Morning tea and refreshments are provided and participants have the chance to win a complimentary treatment showcased at the session!

For more information about the monthly beauty talks as well as Anti Ageing Mondays at Body Temple Spa, call them on: 0361 8483939 or go to the website: bodytemplebali.com