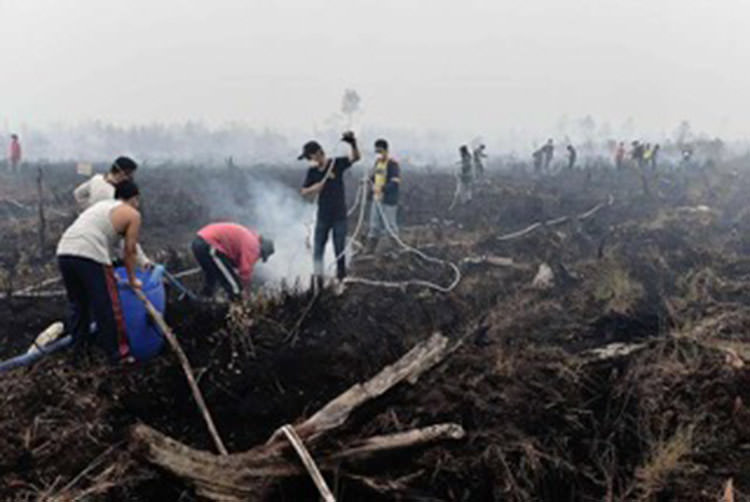 We love our blue skies here in Bali. Sure, we have a little whinge now and again when we endure an afternoon of haze from a rice paddy burn off or the neighbour decides to dispose of his household rubbish by setting a match to it, but imagine a place where the air is clogged with toxic smoke on a daily basis. Think of what it would be like to wake up to a sky so dark with noxious fumes and haze so thick that every breath becomes laboured.

The people of Palangkaraya in Central Kalimantan have been living this nightmare for over two months now as peat fires burn out of control across Indonesia and the air quality in this region is so poor the area has  been declared one of the most polluted places on the planet! The death toll is rising and over half a million people are  being treated for respiratory illnesses associated with the toxic smoke. Supplies of effective masks are limited and what is available is costly. In addition to the toll on the human population, the fires are posing serious threat to the world’s largest orang-utan population as well as numerous other species which call the area home.

The fires are nothing new and for decades farmers have been clearing away forest to make way for large plantations to produce commodities such as palm oil, a widely used ingredient in cosmetics and processed foods. Every year the smoke from the fires becomes an issue with pollution spreading across Indonesia, Malaysia and Singapore, but this year they are out of control with carbon pollutant levels sometimes exceeding daily emissions for the USA!

These peat fires are difficult to extinguish at the best of times as the soil in these areas is incredibly carbon rich from thousands of years of accumulated organic material and the fires burn deep under ground. Unfortunately, with water levels low from an extended dry season and resources and manpower to fight the flames at a bare minimum, the fires are likely to continue burning until the area experiences some prolonged, heavy rainfall. In September there were more than twelve thousand hotspots in Central Kalimantan alone!

Despite current fundraising efforts and attempts to raise awareness about the issue (sadly the focus from international media seems to be waning!!) much more needs to be done to help firefighters  bring the hotspots under control as well as provision of effective anti pollution masks for those living in the affected areas.

In the wake of their hugely successful fundraiser for the victims of the Nepal Earthquake, The Canggu Club is holding an appeal evening on Wednesday November 11th in an effort to build awareness about this eco-disaster and to raise money to assist in the fight to stop the fires. The evening is scheduled to start from 5pm with live music, raffles and a BBQ. The team from Outrop (Orangutan Tropical Peatland Project) will be there to answer any questions and The Club will also screen the Channel News Asia – Get Real Documentary “Heart of the Haze” . The film highlights the severity of the situation in Central Kalimantan, following the local firefighters in their battle against the blaze and presenting an eyeopening outline of the plight of the people in Palangkaraya.

The event is free to Canggu Club members and just IDR50,000 for non-members. All proceeds from the evening will go towards the purchase of much needed N95 masks, along with vital safety equipment for the local firefighters.

Despite it’s disappearance from most international media, it is vital that people understand the extent of this ecological disaster. While we may not necessarily be feeling the immediate effects of the burn here in Bali, it is imperative that we assist in raising awareness and funds to help. After all, our skies in Bali may be blue for now, but what would it be like here if the winds do change……?

For more information about the Fire Appeal,
contact Canggu Club on:
Telp 0361 848 3939
cangguclub.com

Hats off to The Canggu Club for Bali’s Best Melbourne Cup Party! 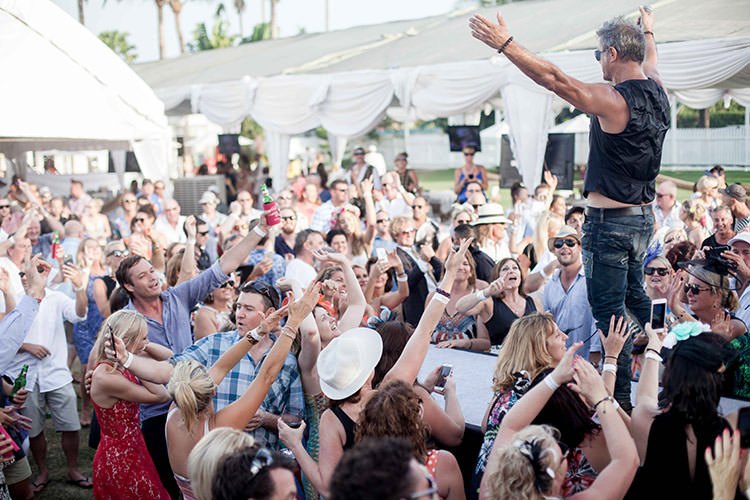 Wowsers what a fabulous day! Last Tuesday’s sensational lawn party proved once again The Canggu Club is the premier place to be to celebrate Australia’s richest event on the racing calendar – The Melbourne Cup.

From 10am, fresh faced fillies and gallantly attired gents filed through the gates and into a Spring racing spectacular that made punters feel like they were at Flemington. Floral arrangements sat atop crisp white tablecloths in elegantly decorated marquees that flanked the stage while a common area between the tents meant that everyone could mix and mingle close to the action. The champagne was flowing and the beer was cold as punters jostled to pick a winner in the sweepstakes or pose for a picture in front of the flower wall – a stunning new addition to this year’s set up.

Really, the race itself is only a small part of the day, although I was stoked to witness the moment that little lady lead her steed over the line to make Melbourne Cup history. I guess it didn’t hurt that I picked first place in the sweepstakes either (winner, winner chicken dinner!) The race might be over but the party was well and truly under full steam with Marina Sidik and her band, New Energy belting out some seriously rocking sounds. This girl can sing! Some guests just couldn’t resist the urge to get up and groove while others took the time to relax and cool down in the marquees as lunch was served.

Fashions on the Field proved impossible to pick this year and judges could not narrow down the field of finalists to less than eleven as gorgeous compere Jodie Brittain guided the lasses and lads out onto the podium to garner crowd support. Tara Lee took out the prize for the fillies with Aryna Bevan a very close runner-up, while  a very dapper Jason Baumber grabbed the guernsey for the guys followed by Gus Simpson in second place. Guests outdid themselves in the style stakes and elegance was the order of the day with printed silks, sleek suits and stunning fascinators stealing the show.

Drinks continued to flow as the sun sank a little lower and onto the stage sauntered the guy we were all waiting to see. There was barely a bottom left on a bar stool once Jon Stevens took to the mic and led us on a rock and roll journey through the nineties and ‘noughties’ with a repertoire of songs from his Noiseworks and INXS days along with some fantastic new material from his new album – ‘Woman’ . The heat of the afternoon was long forgotten as stilettos were strewn aside and revellers rocked into the evening.

Melbourne Cup day at The Canggu Club had something for everyone with raffles  throughout the day raising serious coin for local charity Solemen Indonesia and there weren’t too many tables without a Solemen teddy bear or two as their mascot.

As is the case with every race day, stories abound but there is just one tale too sweet not to mention! I had the pleasure of meeting an Australian couple who made the journey back to Melbourne Cup at The Canggu Club to celebrate the time and place where they met the year before. Lynda and Nic crossed paths at last year’s lawn party and despite living in different states, their romance has blossomed and he plans to move South this month to be closer to her. From the looks of these two, Lady Luck and Cupid were both winners on that day!

Tables cleared and bottles empty, Bali’s Biggest Lawn Party was over for another year, but congratulations and sincere gratitude must go towards the many staff at The Canggu Club who worked tirelessly to ensure guests enjoyed another sensational day. From food and beverage staff, to front of house, security, organisers, planners and management; thank you! You really outdid yourselves.

To check out the photos and fun from the day, be sure to go online at: cangguclub.com and click on the gallery for all of the famous (and infamous) faces from this year’s Melbourne Cup Lawn Party. You never know who you might find! 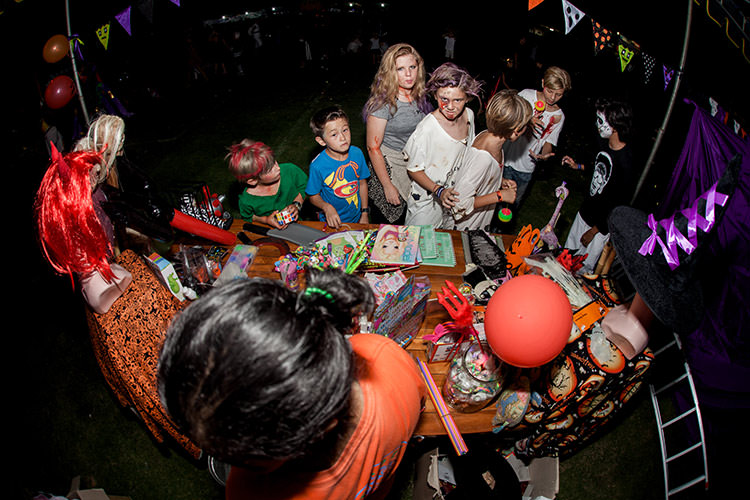 Record crowds and happy faces generally indicate event organisers have pretty much nailed it when it comes to any kind of function and last month’s Canggu Community School Halloween Party was definitely no exception. Hordes of excited ghouls, ghosts and groups in ghastly get ups streamed onto the field at The Canggu Club, which was transformed for the evening’s event…. and that was just the grown ups!

The excitement among the hundreds of kids and their parents was palpable as the masses made their way toward the madness. There was everything a kid (and kids-at-heart) could want from a Halloween party with freaky tunes, jumping castles and a giant blow up slide, face painting, games, lucky dips, raffles and competitions for best dressed. You could even get a lesson from the mad professor at the spooky science lab, or take your chances on a stroll through the haunted house!

Teachers and the tireless volunteers from FOCCS (Friends of Canggu Community School) spent hours on the day preparing the field with stalls, decorations and attractions, the success of the event bearing testament to the weeks of planning and preparation that must go into an evening such as this. What’s also important to note is that these school community events are only made possible due to the generosity of donations from businesses in the community as well as the donation of massive amounts of man hours from the volunteers and committee members involved.

The Canggu Club field proved to be the perfect venue for this huge party, providing room to move and space to play, with sustenance easy to find from the food and beverage stands set up by The Canggu Club especially for the event. Tables were chock to the brim with diners and the field was scattered with family groups making the most of the balmy picnic atmosphere. Many more were lined up to take advantage of the delicious fare on offer.  Prices were kept to a minimum so punters could spend their rupiah at the many Halloween stalls offering up ghoulish gifts and freakish finds. All proceeds from the event will go towards the FOCCS fund which supports the school, the community, charitable organisations and promotions. If you are keen to learn more about the fund, information is always available by contacting foccs@ccsbali.com.

Once again, the desire to dress up reigned supreme and kids appeared in crazy costumes ranging from kooky clowns, zombies, witches, spectres, scary dolls and crazy cheerleaders. There was even some nutty old chic with a nail through her head and in serious need of some dental work…..(no idea who that could have been….)

All in all, fun was the order of the evening and you were flat out finding a frown in the sea of smiles and made up faces, the secure venue making for a worry free night for families, where youngsters could run free without fear for their safety.

Organised every year by FOCCS in conjunction with The Canggu Club, sincere thanks must go this rather amazing group of special people who continue to give selflessly of their time and efforts in order for the rest of us to enjoy such a fabulous evening. If you are a parent at The Canggu Community School and would like to volunteer to help out with the next FOCCS event, please email them on: foccs@ccsbali.com