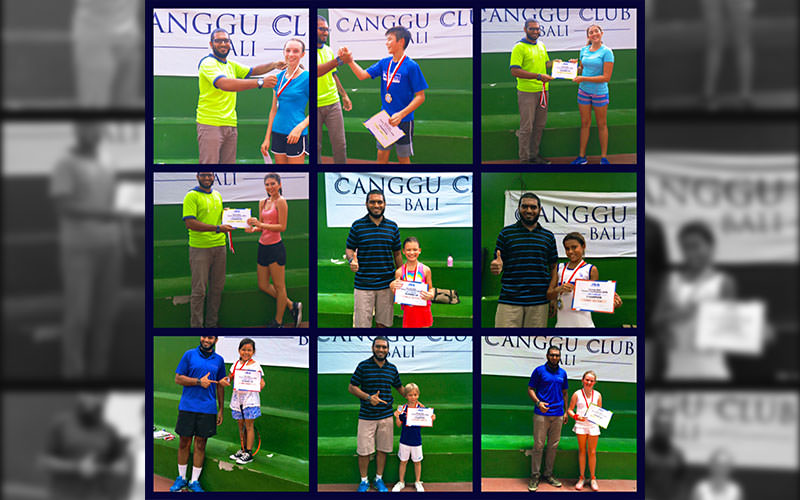 Young tennis talent was revealed over the last few weekends as the Junior Sports Academy held their annual tournament for 2016. The comp which spanned three weekends was an opportunity for JSA players to showcase their skill development and marked improvement over the year. 2016’s comp revealed some surprise packages and serious junior talent with several matches seeing tight competition between the players.
JSA Yellow Ball Tennis Tournament former Canggu Classic junior champion, Jake Day came in as the top seed of this year’s event which was held on on September 24th & 25th.
Second seed, Jackson Penny battled on but was defeated by the up and coming Agus Wibawa in the quarter finals. Agus had four match points at 5-3 but couldn’t close out the match as Jackson, being the fighter that he is, saved four of the match points in this dramatic encounter. He then took the lead and had a match point of his own at 6-5, but Agus had other plans, saving it and taking the match into a tiebreaker. Agus’ consistent display of smart tennis and staying calm under pressure paid off as he prevailed as the winner in the tiebreaker.
Jake Day had little trouble dismissing another young talent, Enzo Gabler in the quarter finals. Enzo recently graduated from Green Ball Level and was experiencing his first Yellow Ball event and managed to make the quarter finals after defeating Leonardo Cisini.
The semi final was a battle between two seniors of the Super Squad…top seed, Jake Day against third seed, Nico Gonzalez. Jake played his offensive hard hitting game whereas Nico was keeping the rallies long in order to put Jake off his rhythm. In the end, Jake used experience to close out the match.

The only girl who from Super Squad, Annabel de Alessi joined the boys and left no doubt as to her skills as she made her way to the final to play Jake Day after impressive wins over Declan Dainith and the the gutsy Agus Wibawa. Annabel used her consistent and effective game play to her advantage and stormed into the final.

Jake Day was too strong for Annabel de Alessi in the final, winning it 6-1.
Due to minimum participants, the Girls Yellow Ball Comp became a Round Robin event.
Second place went to consistent player, Sydney Eckstein and Rachel Donner was this term’s new champion after a solid display of heavy hitting throughout the tournament.

Matheo Martin’s Green Ball campaign began on Saturday October 1st with a win over Ziggy Kloer in a match up where rallies were long but Matheo used his experience to win in the end. The tournament’s second seed, Jack Mollison stormed into the semis with a win over Hayden Clubley who was the tournament’s surprise package where he defeated his senior, Tommaso Castellari in the first round. He bowed out to the eventual champion Jack Mollison in a very close match with a tight score line, 6-4.

Green ball newcomer, Owen Orr made it to the semi finals and third seeded Felipe Gonzalez defeated Justin Muliastra in an epic match, also making it into the semis.

One of these matches saw Matheo Martin defeat a valiant Owen Orr 6-3 to progress to the final. In the other semi Felipe Gonzalez initially took the lead, but Jack Mollison had other ideas, pulling out a different game plan and winning most of the long rallies by coming to the net and volleying…thus taking the win by 7 games to 5!

The final was a battle between the top two seeds. Once again, Jack Mollison was trailing, facing a match point with Matheo’s service, but he truly showed that tennis is a mental game, remained calm, changed tack and took the next three games, winning the final, 7-5. He saved a total of five match points throughout the tournament and won the title!

The third and final weekend saw younger players from the Red and Orange Ball division take to the court in the hope of victory! These slightly smaller battlers were a delight to watch and what they lacked in years was certainly made up for in determination!

The Red Ball Comp was a unisex division and the final match was a battle of two tiny titans in Zoe Penny and Emile Stewart Khan. Emile eventually took line honours with a well deserved win, however Zoe’s smile as she accepted her medal indicated she was proud as punch to be up on the podium. Ptolomy Worth took out the Orange Ball Singles title for the boys over runner up, Jack Simpson, while Grace Hoyles made for a worthy opponent to Winner Saba Hilton in the Orange Ball Girls’ Singles competition.

Competition over for another year, the players resume practice with the Tennis Academy from October 17th in their after school program. For more information on how to join JSA Tennis, email jsa@cangguclub.com
Located at Canggu Club. Jalan Canggu Club, Canggu. JSABALI.COM

New Sports and More in Store for Term 2

Free Entry After 5 and All Weekend – Everyone’s Welcome!
Scroll to top